Internet accessible radio! Here's a link to an interesting station KBRW AM/FM Barrow, Alaska. Click on the bouncing radio to listen live. Nothing like music from the top of the world huh!

Another station I like to listen to is KTNN AM 660 To listen live click on the Listen Live link on the left hand side of the screen.

I'm starting to collect a lot of radio stations, I'm still trying to figure out how to get them into Media Player, till then they are in my favorites folder.

I've also found a few with some celtic music, bluegrass, and mandoline music, oh and my dads current favorite southern gospel. I rotate them out depending on my mood that day. I also find Canadian radio to be a lot of fun CBC Newfoundland and Labrador My mom is from Newfoundland so it's nice to have the tie there, adn they play some pretty good Newfie jigs from time to time very reminescent of my childhood - mom was a pretty mean harmonica and accordian player.

Oh and I should also add CBC North This is for the far North Eastern part of Cananda.
Posted by k baxter packwood at 7:56 PM No comments: 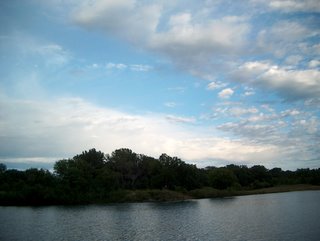 This is the patch of water that we went fishing at today, I caught two large mouth bass, I was quite happy about that little feat.
Posted by k baxter packwood at 8:54 PM No comments:

If you don't be quite

I'm going to use you as bait!!! I'm guilty of saying this several times today - to someone elses child no less. I have no idea who the guy is, but he's a world class bastard in my book, he dumped his kid off on us while we were fishing. He finally came back and got him some four hours later. It would appear that he was more interested in walking the beach area and talking on his cell phone the whole time to impress the children over there - all the while his kid was driving me nuts talking a gazillion miles a minute. Hence the above statement.

I told my husband from now on whenever we are out fishing, hiking or camping if someone asks to watch their kid for a few minutes - supposedly so he could go change into his swim trunks but he didn't come back for a very long time - that we will do so but only with a $75.00 non refundable deposit, and my professional babysitting charges are 75.00 an hour - after all I was a professional nanny on the east coast for five years working for Americas finest blue bloods.

I've got this guy pegged as either a drug dealer or child predator - based on his behaviour and the need to hang out with all of the other "childern" on the beach. The beach was a good clip cattey cornered from where we were at so you couldn't hear the casual conversation. But it was obvious that he was not interested in his own child.

I was pissed because I wanted to fish in peace and quite and do some watercolors and some drawings. I didn't have babysitting on my plate today, and I think it's damned rude to just pawn your child off onto other people, especially when you don't know them.
Posted by k baxter packwood at 8:41 PM No comments:

Of Fish and Men

We just got back from fishing, it was horrible tonight nothing was biting and the lakes were packed with people wishing that they were biting. I did catch one croppie, that I threw back as it was a bit smallish. Unforunately that lake we were fishing at is in a public park and closes at 10:30 pm, and the fish were definately biting there.

So we will get up very early in the morning, when the sheltie alarm goes off, and try fishing again, when most folks are still in bed/camp sleeping. A few of the places that we'd go that close early in the evening open at sunrise, which is around 5:15 am right now. So if I'm going to get any sleep I'd best be going to bed.
Posted by k baxter packwood at 10:40 PM No comments: 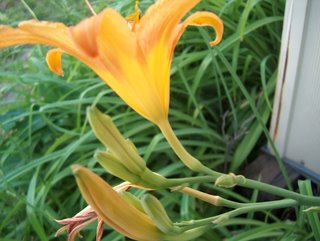 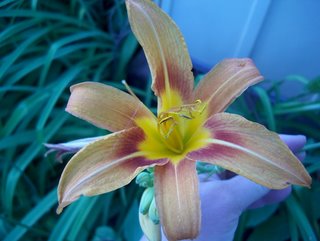 I think this is a day lily. I'm utterly confused as in Abundant Harvest, on page 301, the author describes the day lily as having no spots on it's petals, then shows a picture of a flower with spots on it's petals and the caption reads "day lilies".

If these are indeed day lilies I plan to munch on them and enjoy them!!!
Posted by k baxter packwood at 5:52 PM No comments:

create your own personalized map of the USA
or check out ourCalifornia travel guide
Posted by k baxter packwood at 8:20 AM No comments:

I gave both dogs a bath tonight. The next time I bathe the sheltie I'll have to take her picture she looks like a drowned rat every single time, and a pathetically cute one at that! J- and I groomed her a little bit ago, I saved the clean down undercoat for spinning, I'll spin it in with some icelandic and knit a scarf for J- with it, since he requested this.

I will have to groom her in a couple of weeks though in order to have enough fluff to do this. It's a lovely grey color that'll blend in with my icelandic beautifully. Once spun up I think I'll dye it with indigo and then overdye with osage orange for a drop dead gorgeous heathered green color. One xmas present down and several more to go!

She looks and smells really nice now, too bad it's so hot out this will last a day or two at the most - the smelling nice.
Posted by k baxter packwood at 7:45 PM No comments: 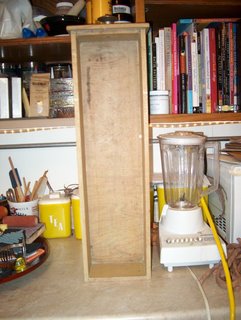 I have this narrow drawer that I decided to create into a shrine of sorts. In it I am putting my mothers slippers and her curlers, amongst other things. I really love the knob on the top of the drawer, so I'm planning to play it up somehow.

Mom was a world class scavenger, she told everyone she was a crow. Dad likened her more to a racoon, but she definately had an affliction for anything shiny. I'll have to go to the attic and get her antique bottle collection, that she found in the field behind their house, so I can include the bottles in the box.

She also liked pretty things, though you'd have never known it about her, too rough and tumble. You were more apt to find her on a lake somewhere fishing or hunting than at any prissy social function. So somehow I'll combine found objects, that she gave me along the way, and other items I have found with this piece. Unfortunately this is the only drawer I have like this, it came with printing blocks in it that I bought at a yard sale. I guess I purchased the drawer just for the blocks.
Posted by k baxter packwood at 8:16 PM No comments: