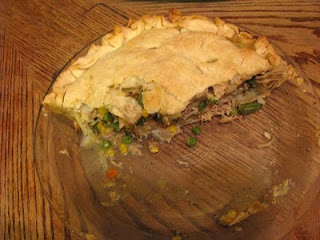 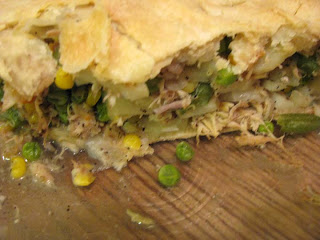 Made chicken pot pie for John tonight, he was in heaven!

Mix the meat and veggies in a sauce pan if the meat isn't juicey add about a half cup of water.  Heat to a boil and boil about three minutes, put a lid on the pan to keep the steam in.  Season, to taste, with the spices a pinch of each will do.

If the mixture is super runny add a bit of corn or potato starch to a couple of tablespoons of water stir until well blended and then add to the veggie meat mix.  Heat until it thickens.

To make the crust brown I coat it with some milk before baking using a pastry brush.

Put into your prepared pie crust cover the mixture with a pie crust round, crimp the sides.  Bake at 375F for about 45 minutes or until bubbling.
Posted by k baxter packwood at 6:08 PM