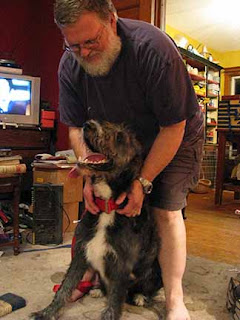 Introducing Oliver, aka Junior!!! He's a labradoodle and at eight months of age weighs in at 75 pounds. 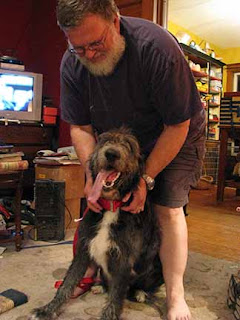 He is super affectionate, phantom kisses you never see them coming, and he's super excited to be here with us.  Today training began it's crate day.  So far we've been out on two short walks and have had meals, potty breaks (he's done both so I'm no longer worried about him - he got sick, really sick, in the transport crate yesterday on the ride up from Texas) and have had moments to explore the house and then it's back to his crate so he knows where his den is located and that it's all his.

I'm also still puppy proofing the house, turns out he can put his front paws on the fridge and pull food off the top of the fridge!  (eep)  When he sits next to the kitchen table he's tall enough to simply lay his head on the table, and that tongue, it manages to swipe everything within reach.

So I'm spending time cleaning and talking to him and Angel.  The cats want to know who the grey monster is!
Posted by k baxter packwood at 11:53 AM